Welcome to the wonderful world of 1990s advertising

Over the weekend, ITV’s CITV channel showed a collection of retro kids’ TV shows from the 90s. But while Pat Sharp and the Twins, Tregard and his hapless dungeoneers and Julia Sawahla’s Press Gang all triggered waves of fond memories from the decade that shame forgot, something key was missing. 90s adverts.

And not just for nostalgia purposes. Because while we’re all falling over ourselves to heap praise on the Old Spice Adverts, or to blast unfocused rage at the BT Infinity Students, we’ve forgotten some great adverts from the past.

Which is a crying shame. So rectify that failing now, with lessons from four great 90s adverts. And no, smartarse, the Guinness surfers don’t even make the list.

I’ve chosen four adverts that you should all remember, selling products ranging from cereal to cigarettes. All of which have an important lesson to teach today’s great marketing and advertising minds.

The Lesson: Humour can sell even the most mundane products

As far as breakfast cereal goes, Weetabix is pretty boring. Compared to Frosties or Coco Pops, a bowl of Weetabix isn’t going to stoke the imaginations of any child of the 90s.

Until the advert above sailed into view. Weetabix might be dull, but it can help you see off a ship full of the meanest pirates ever pressed. And no amount of chocolate coated puffed rice can make that claim.

The concept is simple. Instead of appealing to people’s better nature with claims about health or keeping hunger at bay, entertain them with something fun, light-hearted and amusing. And throw in a catchy song to make sure people remember your product.

Just make sure you don’t go overboard – irritate your customers and you’ve got a 2010s Go Compare disaster on your hands. 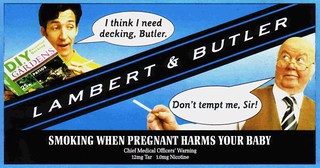 Alright, the nicotine in a pack of L&B probably hooked more people than Lambert and his butler, but the massive, regularly-updated billboard near my school ensured that when it came to making the second biggest mistake of my life, I did it with Lambert.

The concept is simple. In 2010s parlance, you’re bringing your customers into a circle of ‘banter’. They know Lambert’s a half-witted toff, they know the butler’s a sarcastic everyman, and they understand the relationship. But unlike with the toe-curling BT Family that ruined TV between 2005 and 2011, limiting the characters to two line stories kept people interested. They got the joke and wanted to be part of it.

And it also linked the concept of having a laugh with your mates to the concept of setting plants on fire and sucking on the smoke. Which doesn’t hurt when you’re selling a product that comes plastered in death threats.

Boddingtons – Put a Flake In It

The Lesson: Don’t take yourself too seriously

The Boddies adverts of the time played on the fact that many adverts were glossy, high-concept short films that bear little to no relation to the product being sold. A trend that continues with modern perfume adverts. But by letting the viewer know that Boddingtons were just as baffled by the fat drummer hitting the beat as the rest of us, this advert immediately kindled a relationship.

Relationships sell. And who wants to be in a relationship with a self-important buffoon?

The Lesson: Nothing beats going viral

If you want to go viral, here’s what you need to do:

1) Introduce something that kids will copy in the playground.
2) Get your advert banned.

That’s all Tango did. Despite only running for a few weeks in 1992, the Orange Man advert caused a storm.

Kids in playgrounds up and down the country were gulping down Tango and then “Tangoing” each other, as dinner ladies, teachers and parents looked on in horror. The slap being removed and replaced with a kiss didn’t change anything. Within days, we all knew that a slap was a Tango, and a Tango was a drink. And the resultant outcry did nothing more than solidify that link in our thirsty young minds.

These lessons have (consciously or not) influenced a generation of marketers and copywriters. But they’re not the only things we learned from adverts in the 1990s. So don’t forget to share your favourite ad from that decade in the comments section below – and the lesson that you learned from it.

Now if you’ll excuse me, I need to paint my head orange and go slap somebody.